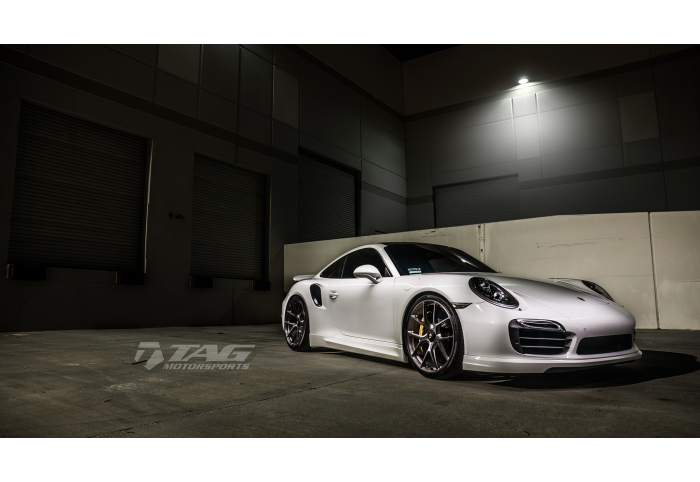 Skip to the beginning of the images gallery
Details
The TECHART Front Spoiler I for the Porsche 911 Turbo and Turbo S Is a subtle but perfect addition to the front end of your 991 Turbo. It incorporates the active aerodynamics at the basic vehicle’s front apron and thus supports its functional capability. TECHART Automobildesign controls the set up of the adaptive series spoiler at the vehicle’s front apron in a way that it either fully extends by the press of a button at speeds under 120 km/h, or does so automatically at speeds of over 120 km/h. Just like every genuine TECHART product, each part of the TECHART Aerokits has to undergo hard and demanding test procedures during its development process. In terms of aerodynamic components, wind tunnel testing is crucial for both, optimum driving performance and highest active safety. Already at speeds of 140 km/h, the TECHART Front Spoiler I reduces the uplift at the front axle of the 911 Carrera and Carrera S by 5 kilograms. At the same pace, the TECHART Rear Spoiler II generates a remarkable additional downforce of 17.5 kilograms at the 911's rear end. This aerodynamic advantage grown at increasing speeds. At top speed, the TECHART Rear Spoiler II generates 76 kilograms more downforce at the rear axle than the series 911 Carrera S. In other words: the TECHART Aerokit I ensures well-balanced aerodynamics and improves driving stability significantly, especially at high speeds. The product is primed and ready for painting.
VEHICLE APPLICATIONS
More Information
Prop 65 Warning