Taking an extreme vehicle to further extremes is no easy task. With Mclaren being some of the best in engineering there isn’t much to be improved. But there is something that can always be improved and molded into a new interpretation of the original piece. Novitec is no stranger to improving upon some of the most beautifully designed and masterfully engineered vehicles. We weren’t surprised they made sure that the Mclaren 720s was the newest recipient of their N-Largo program.

Being one of the largest Novitec Dealers in the world, we have been a part of several N-Largo projects before so we weren’t surprised of our insane itch to get our hands on one of these. This example is 1 of 4 (in which we are building 3 of them) 720s N-Largos that will be built in the U.S. and 1of 15 in the world. A conversion of this magnitude takes precision in planning, attention to detail, and fine-tuning an already fine-tuned piece of engineering. This is why we built this project completely in house to oversee the quality of fit and finish on all pieces and tuning. This includes painting, installation, and performance tuning. We pride ourselves on knowing the in’s and outs of extreme projects such as Novitec's N-Largo conversions through our previous experiences and builds. Our experience would pay off on this project, along with Novitec's experience in making a properly designed conversion with excellent craftsmanship, fit, and functional engineering.

This example belongs to Cliff Avril who is a good friend, client, and former Seattle Seahawks Super Bowl champion. Upon hearing about plans of this conversion being released, he was one of the first to secure a conversion for his incoming Mclaren 720s. Upon receiving his brand new 720s, we received the conversion pieces and started to carefully and take apart the vehicle for observation and conversion preparation. Looking under the bare skin of the Mclaren we got a chance to appreciate the engineering put into this car and see how well the Novitec conversion mated with the factory’s ingenuity. All of Novitec's N-LARGO kits are wind tunnel engineered and tested. That means FUNCTIONAL AERO! Nothing is overlooked. All factory pieces were properly documented, bagged, and stored to go back to the owner in brand new condition. You can check out videos we made documenting some of the processes on this build to get more insight on the process. After disassembling the Mclaren, we had space to test fit all the Novitec pieces and make any notes on adjustments we needed to make as well as check tolerances in clearance for after paint is applied. Speaking of paint, the paint process with Mclaren is an amazing process as we learned. Their detail into documenting their paint is amazing, and it takes a lot of work and resources to match it. But we would settle for nothing less and were able to secure an exact match for the paint through our world-class paint system. All pieces were properly fitted, tested, prepped for paint, then handed off to our painting department. The Novitec front fascia, hood, widened front fenders (additional 6cm) side skirts, rear complete widened quarter panels (additional 13cm), were all sent to our paint department. The rear valence, roof air scoop, rear wing extension, and mirrors were all left in there carbon fiber finished and were wrapped in xpel clear bra for protection.

While the Mclaren was disassembled and parts in the paint booth, we had the opportunity to install the N-Largo tuning parts. The engine received the Novitec N-TRONIC control unit which is plug and play. We also installed the Novitec Race Exhaust with cockpit controlled exhaust flaps which completes the Novitec Performance Stage 2 for the Mclaren 720s. This results in a power output of 806hp and 878nm of torque and a healthy increase of 86 peak hp and 108 nm of torque over factory configuration. 0-60 is 2.7 aka very fast, and top speed increased to 346 km/h. Next, we installed the Novitec sport springs which allow the height to be lowered 35mm and perfectly compliments the ride height with the new aggressive skin.

Once we received all pieces back from the paint department, we properly fitted the pieces and double, triple checked the tolerances. Thanks to Novitec designing their kit to be used with all of McLaren’s original factory mounting points the fitment was flawless. They do an amazing job of building their kits to and/or above factory standards. After all body parts were installed, it was time for the final ingredients. The most important final piece was the proper wheels to complement the new stronger body. Novitec worked with Vossen Wheels to design a wheel that would have the most epic concavity, while still being up tNovitec'scs standards in strength and craftsmanship. Novitec MC2 Forged 20x9 fronts and 21x12 rears are fitted with Pirelli P-Zero performance tires in 255/30 ZR 20 and 325/25 ZR 21 sizes. This gives the 720 N-Largo a stunning presence when set on the ground. 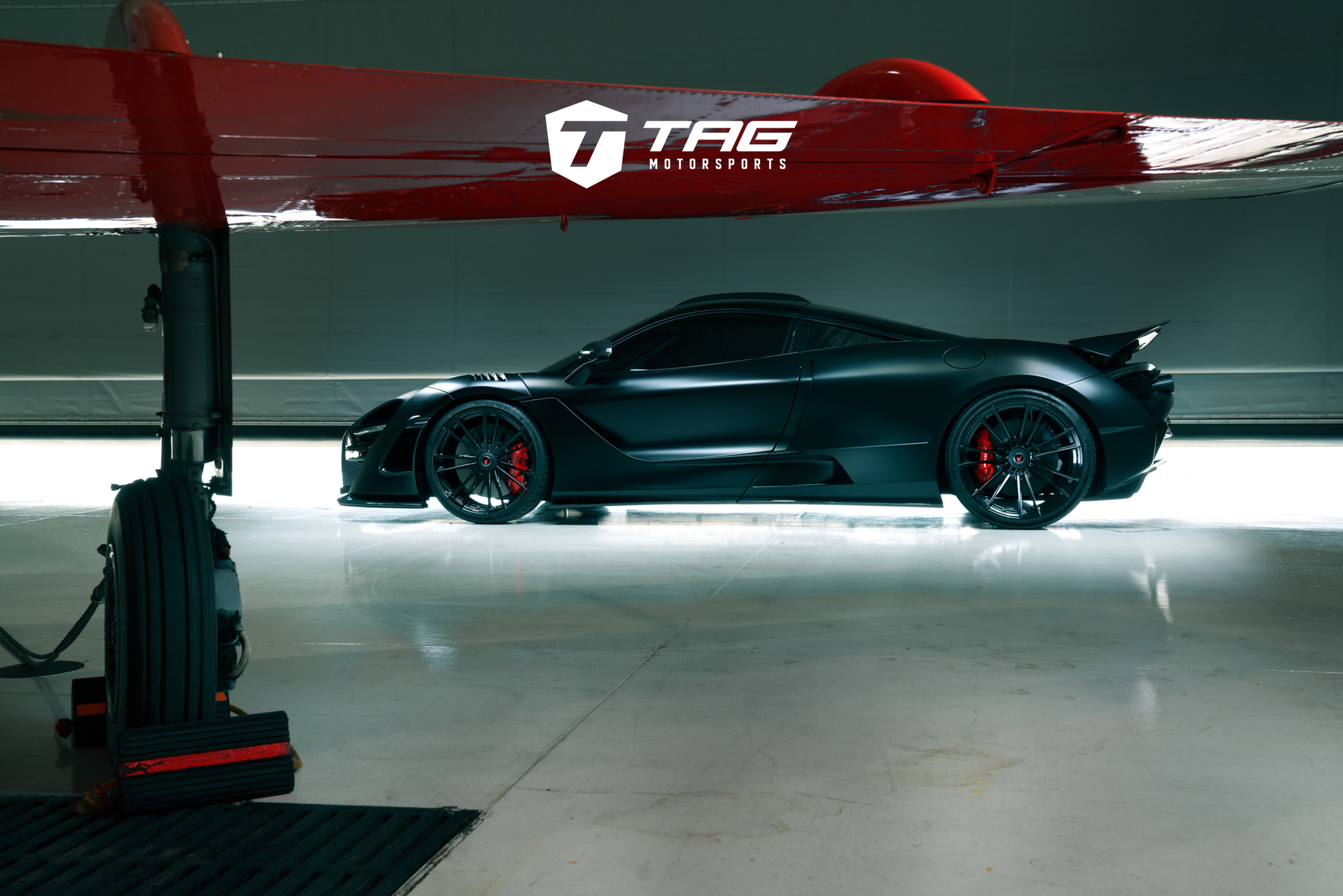 To finish it up, we added our TAG Cosmetic Blackout Package to the Mclaren emblems, as well as custom made 720s N-largo badges, and wrapped the car in a total Xpel stealth clear bra, that took the factory paint and gave it a more aggressive satin look. Taking this car from bad to straight menacing! Even Bruce Wayne would blush.

Well how does all this play out in the real world? Wow! Novitec took this car to another level. Acceleration is mind-blowing  (even more so than factory), the audible experience is insane, the car commands a presence on the road that very few vehicles could claim, and still can be driven on the street like the factory 720s for daily duties, cars and coffee and such. Take it on the track or a strip and watch it performance and the functional widebody aero go to work! We are in love with this 720 N-Largo and look forward to the next few we being built in the bay. WHAT A BEAST! 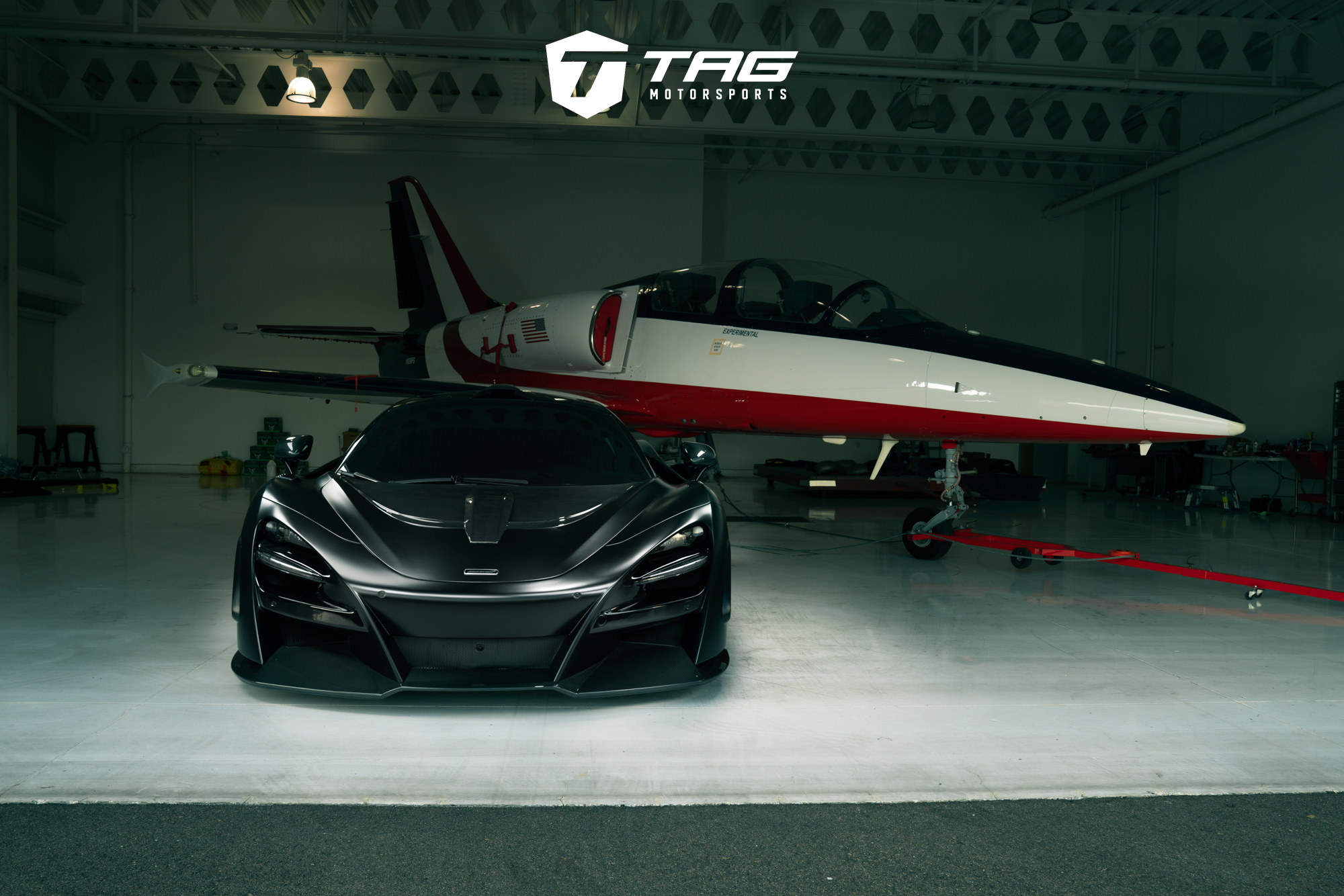